THE ART OF DRAWING FLOWERS

Art Review
Ancient artists began to depict flowers since the time of Ancient Egypt. Among the images inside the Egyptian pyramids, even in our time, you can see lotuses painted many thousands of years ago. In ancient times, the inhabitants of Egypt considered the lotus as a sacred plant with mysterious energy, and the inhalation of the aroma emanating from it was captured in the interiors of temples and tombs.
But in a separate movement of pictorial art, still life stood out much later - in the 17th century in the Netherlands. The tendency of the population of these lands to engage in gardening and growing flowers has affected. In the paintings with flowers by Dutch artists of that time, all kinds of vegetation blooms in lush color: delicate tulips and noble roses, spring lilies of the valley and modest forget-me-nots. In the rays of sunlight, lilies and violets, irises and carnations, daisies, mallows bloom. 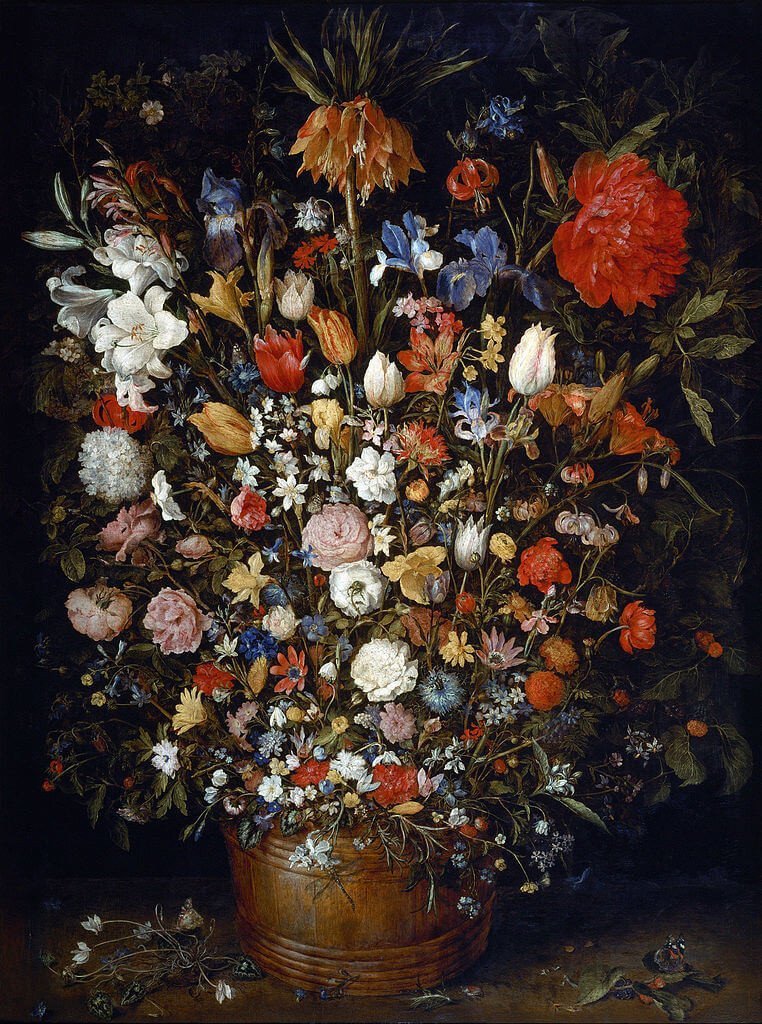 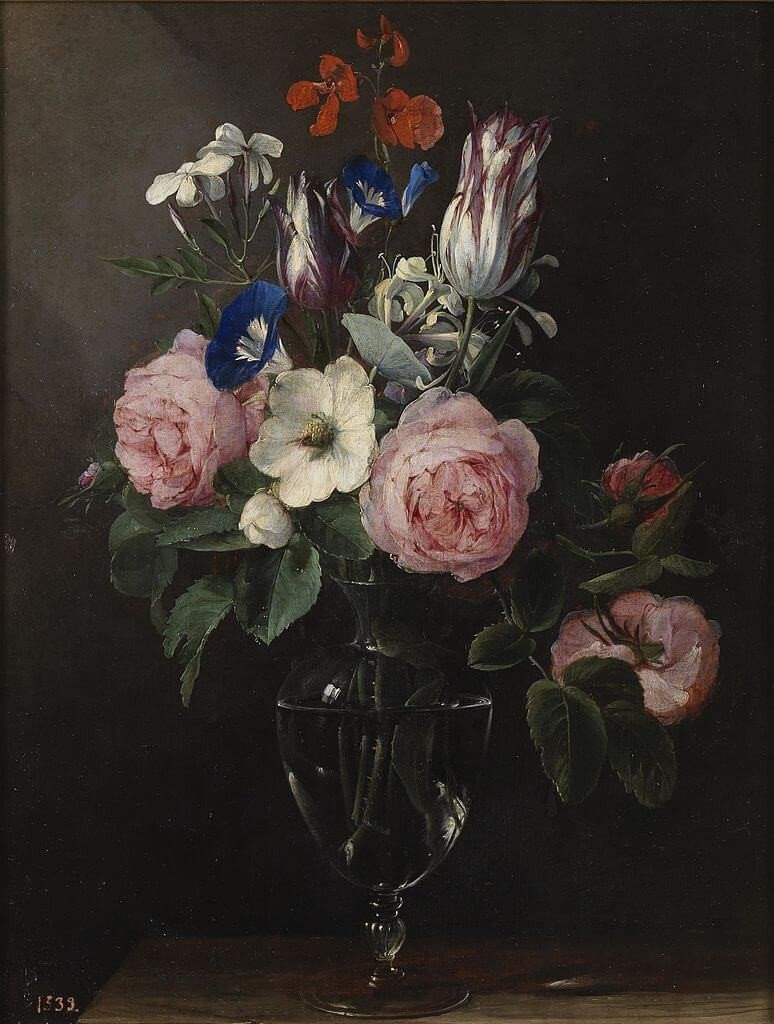 Vase of Flowers by Jan Brueghel the Elder, first quarter of the XVII century. 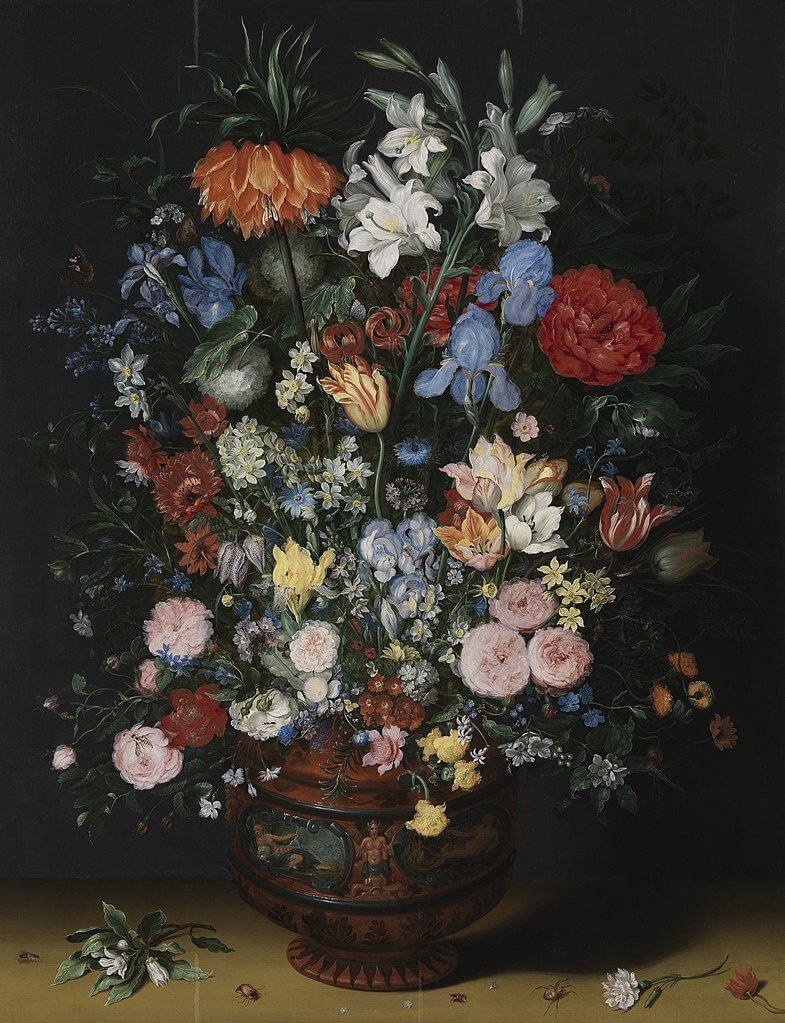 Flowers in a ceramic vase by Jan Brueghel the Elder, XVII century .
The art reflected the passion of the inhabitants of this country for gardening and growing flowers. In Dutch paintings of that era, roses and tulips bloomed, lilies-of-the-valley and forget-me-not mallows, carnations, lilies, forget-me-nots, daisies, violets and irises reaching for the sun.
The artists strove for sophistication and unusualness, therefore, in their oil-on-canvas works, they painted flowers that bloom in different seasons. To capture them from nature, sometimes it took several months.
For this reason, only wealthy art lovers could afford to buy flower still lifes. 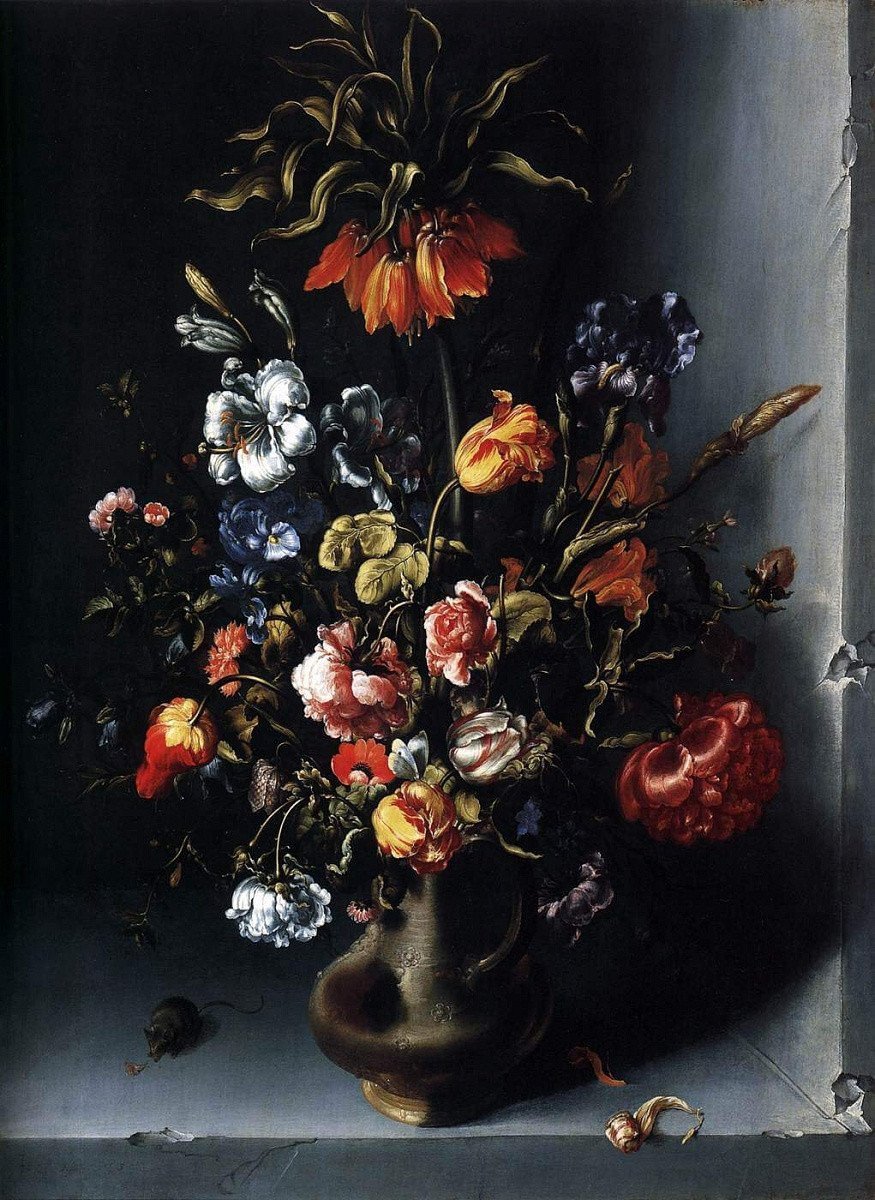 Still-Life of Flowers with a Fritillary in a Stone Niche by Jacob Wouters Vosmaer, 1613. 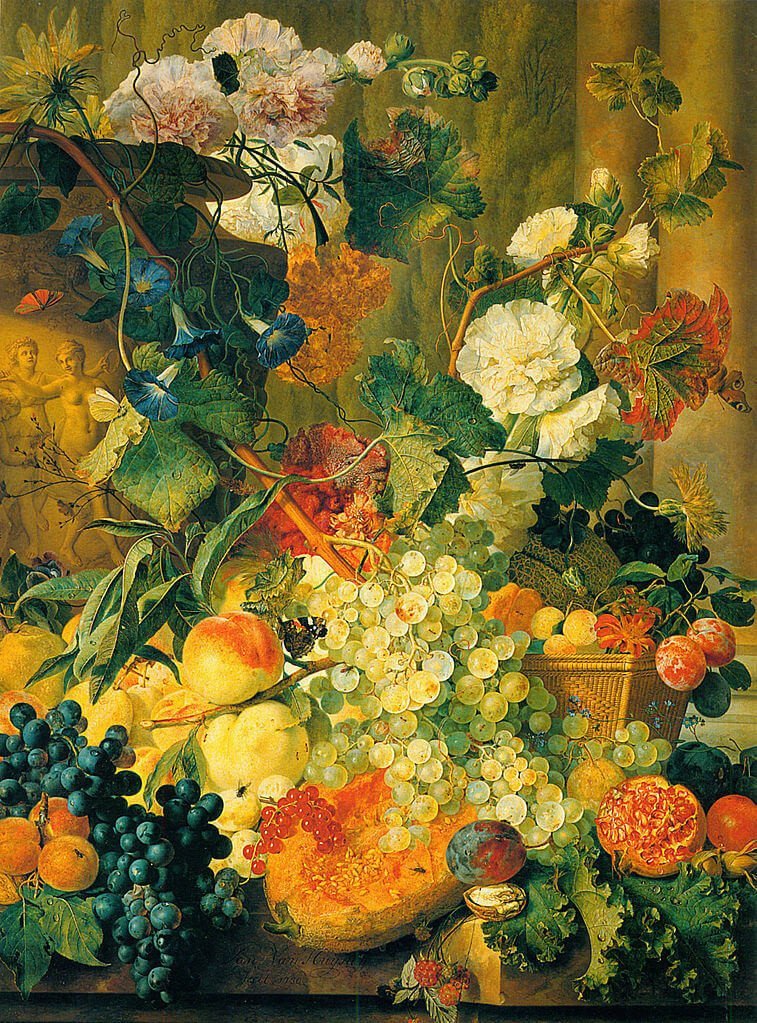 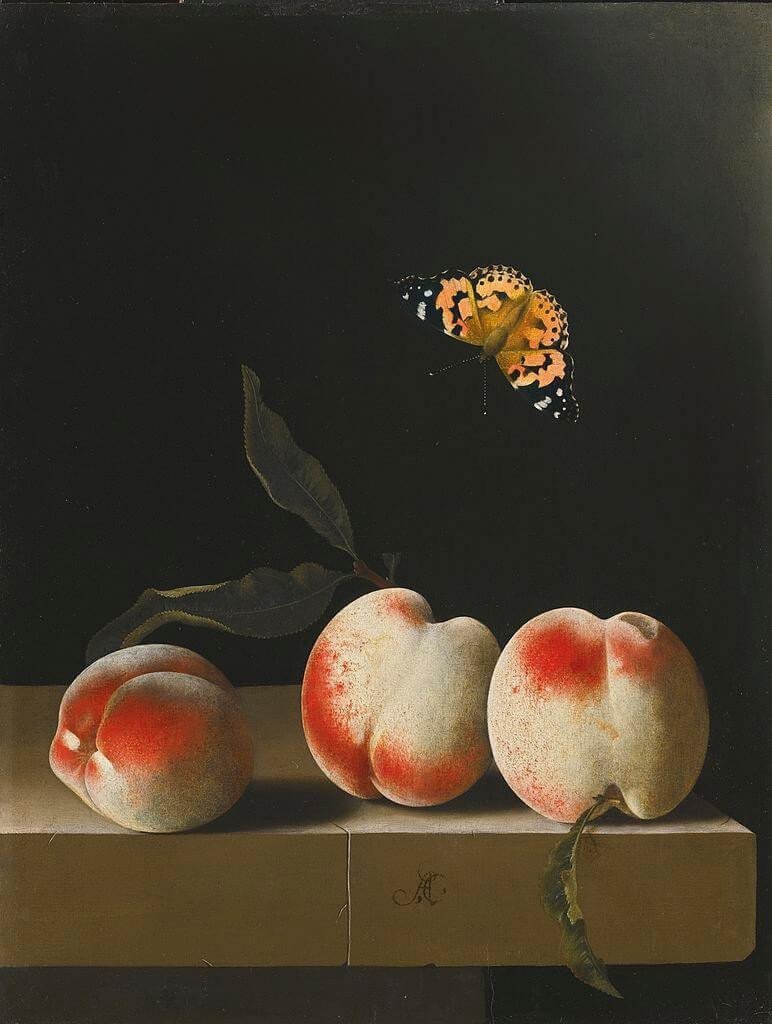 Three peaches on a stone ledge with a Painted Lady butterfly by Adriaen Coorte, 1693-1695.
The painter from Flanders, Jan Brueghel the Elder, who created his works in the second half of the 16th - early 17th centuries, found the sources of his work in the greenhouses of the king in Brussels. He created his paintings with flowers from nature. Often the artist would patiently spend many months waiting for the flowering of the plant he wanted to capture.
In the first half of the 17th century, Jan Baptist van Fornenburgh created his floral works in the Netherlands. He gave the paintings an allegorical meaning, trying to show the transience of life, depicted plucked and fading flowers. The master was not limited only to flora: in addition to roses, daffodils, tulips, he introduced animals, insects and birds into the plots of his works.
In this he was not alone: the Dutch master Jacob Wouters Vosmaer, who worked in the same era, painted dragonflies, bees and butterflies in his paintings with flowers.
Let us recall other painters who painted flower still lifes, which have become the property of world art due to their high artistic merit. Among them are the 17th-century Dutch painter Abraham Mignon, and his compatriot from the next century, Jan van Huysum. Less is known about the 17th-century master Adriaen Coorte, who painted artworks with flowers in a minimalist manner. These artists raised the genre of flower painting to an unattainable peak. 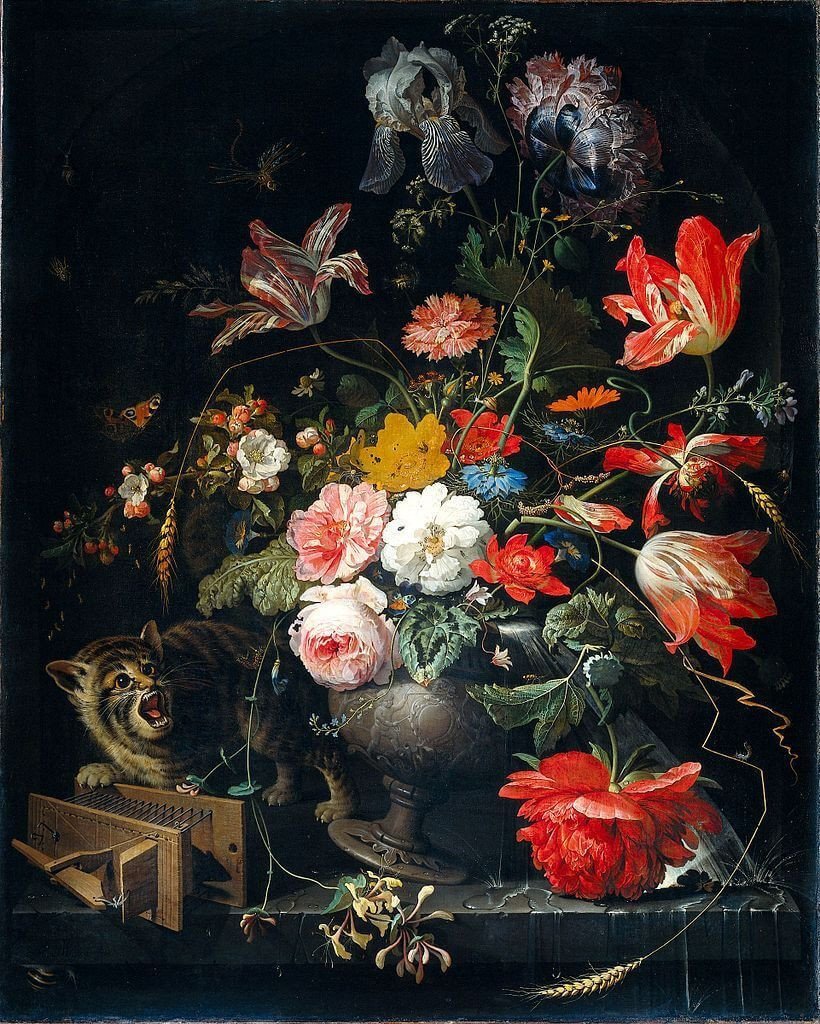 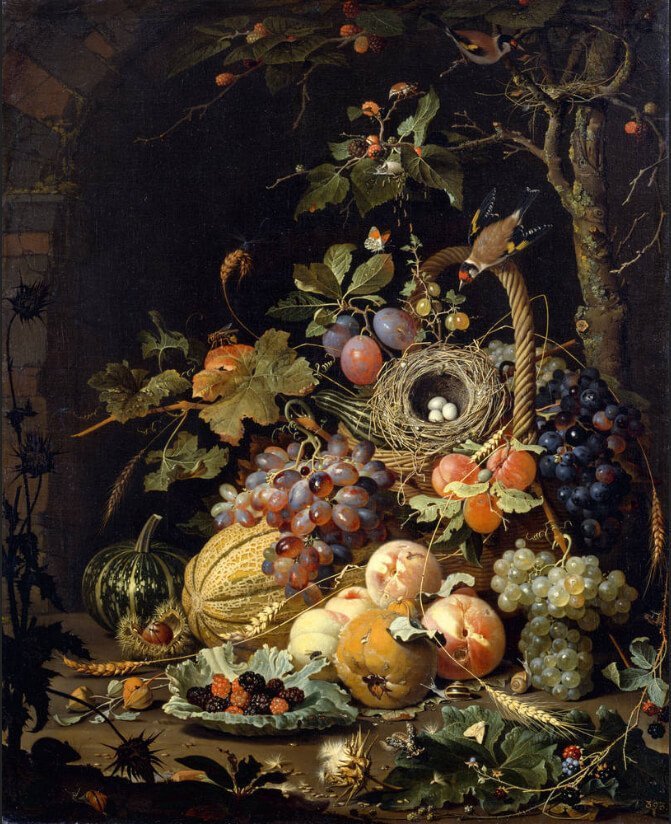 A Bird's Nest in a Fruit Basket by Abraham Mignon, 1665 – 1679.
They knew how to create floral masterpieces of art not only in Europe, but also in the East. Life pushed Eastern artists to this genre: in Muslim countries, the canons of religion did not allow creating works with images of people and animals. Therefore, exquisite floral ornaments were a traditional element of paintings on the walls of mosques.
Painters from China did not lag behind their European counterparts. There, since the Middle Ages, the Huaniaohua genre has enjoyed success, the name of which in Chinese means “birds and flowers”, an approximate analogue of the European flower still life. Making these images, the painters sought to create a contemplative mood. Chinese artists liked to put figurative meaning into their works. Peonies symbolize nobility and wealth, and spiritual purity is emphasized by the image of a lotus; chrysanthemums serve as a symbol of detachment; and meihua, plum blossom, means inflexibility and spiritual perfection. If bamboo, pine and plum are depicted together, this means that the artist has captured an allegory of strong friendship.
You can buy still life painting with flowers in the Jose Art Gallery online gallery.
We use cookies and similar technologies to provide the best experience on our website.More information >