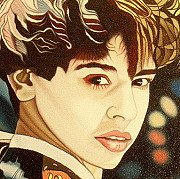 About the artist MANUEL SANTIAGO

MANUEL SANTIAGO is a Spanish Contemporary Artist currently based in Brisbane Australia. He works mostly in oils, mixed media, charcoal and acrylics. Manuel Santiago was born in Malaga Spain. He has crossed the globe many times and as a traveling artist he has absorbed all patterns of life and cultures in the true sense. This has influenced his work so that we see flashes of different cultural aspects threaded through his canvases. Subject matters and themes invoked in his work in the early eighties have evolved to present strong vibrant canvases which attract commissions from private and international collections - surrealism and the abstractions with intense movements in the works. He selects and uses to good effect the contemporary spatial impressions in the linear works of 2001 - the Universe works, the world beyond. There's a strong visual power in his work, serenity but also strength and purity. Manuel Santiago's work has been represented by some of the most prominent Art auction houses in the world since 2007, including Bonhams Los Angeles and Bonhams New York in Contemporary Art.