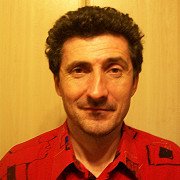 About the artist Jaroslav Balandyuh

Born on June 26, 1965 in the city of Lviv, Lviv Region. In 1985, he graduated from the department of artistic metal processing of the Lviv School of Applied Arts named after From 1992 to 1998, I. Trusha studied at the Department of Monumental Painting of the Lviv Academy of Arts. Member of the National Union of Artists of Ukraine since 2005. Works in the area of easel, sacred and monumental painting, mosaic technique. Participates in international plein airs, other general exhibitions, events.