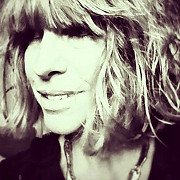 About the artist Hildegarde Handsaeme

Born in Kortrijk 1958 Belgium Hildegarde resides and works in Terlanen (S.E. of Brussels) . With an articulate preference for the figure and the nature of woman she went the self-teaching way in the plastic art form . The sensitive approach of this theme remains her source of inspiration which is utterly inexhaustible . The recognition of her artistic plastic language was a fact a couple of years ago when she obtained the third international prize for painting in Libramont . Hildegarde Handsaeme paints mainly women and follows a harmonic and constructively perfect pattern . The figure in itself is dominating but she knows how to put it the right surroundings where nature and cosmos play a symbolic part . With a set of straight lines she builds a mysterial haze of inner feelings on the canvas in a simple but penetrative way . She does not call for hallucinating images bet lets herself go with sensitivity guided by an unfailing intuition . Even when the figures at first sight seem distant they point to a certain duality and yet her usage of colours express a honest alliance between the data and the deeper thoughts .Simply and honestly Hildegarde gives us the message of love and tenderness which should be shown to each individual . In a pictural equilibrated and harmonic way she knows how to remind us of the glamorous intuition of woman .

I have followed 4 years of visual arts in drawing lessons in order to master the art of drawing, which I found a must to further develop in painting. Finally, I moved spontaneously to painting ... At the academy my style was not fully supported ... I had to follow the thinking of the "teachers" ... Luckily, I was discovered by an "Eminence Grise" who gave me the good advice to leave the academy! Reason? He found that I could control the perfect line and could also keep up with color use so that everything was in balance. He was full of amazement of my personal style that I had already developed at an early age. He encouraged me with a solid fact that says: "Only talented artists find their own style and you are obviously one of them!". For the "Eminence Grise" it was evident that I would evolve in my genre without intervention, something that in his eyes is a very big exception! He also emphasized that my work, the longer it will be viewed, the more it becomes interesting in the brain, resulting in an ever-increasing appreciation ... I have followed his advice!