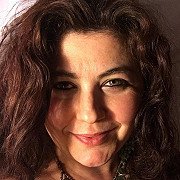 About the artist Faracy Grouse

Faracy Moon Grouse is an artist based in Edinburgh. Originally from Minneapolis, Faracy arrived in Scotland by way of a decade in Spain and England. Her parents ran a Native American artefacts business, and she grew up surrounded by beadwork, buffalo hide, and art produced on Indian reservations. She frequently assisted her parents with both the restoration of antiques and the creation of replicas, and her paintings today show clear influences of Native American art, in particular that of the Pacific Northwest. She has been working as a professional artist since the age of 5. Faracy also draws inspiration from a lifelong interest in Eastern European culture and her Ukrainian and Lithuanian heritage. Many of her paintings recall the icons of the Orthodox church. However, her subjects come from a range of cultures. She is as likely to paint a figure from Celtic, Norse or Japanese mythology as she is to paint an Islamic or Christian saint. Even then, these saints tend to come from the peripheries, with her interest drawn by the more unusual and lesser known figures from religious traditions. Her work is bold, surreal and feminine, weaving together organic forms with illuminated colour. Sometimes her work is dark; at other times, light and playful. Faracy has produced performance pieces such as the candlelit improvised choral work Spark, and she has also exhibited a series of conceptual sound sculptures played by the sun, earth, water and air. She frequently embodies deities as a form of performance ritual. In 2017, Faracy founded the art collective My Mother is an Artist, celebrating women with children in the arts. She also is one of the three founding members of the Seasons of the Witch Arts Collective along with Karen Strang and Julia Jeffrey. Her upcoming plans include bringing Seasons of the Witch to America and starting work on a temple of the divine feminine in rural Lithuania.

upcoming in 2019 Solo exhibition, TBA My Mother is an Artist, Edinburgh UK 2018 Seasons of the Witch: Seasons of Mists (Alloa, UK) Seasons of the Witch: Wild Harvest (Glasgow UK) Seasons of the Witch: Rites of Spring (Edinburgh, UK) 2017 The Art of Divine Inspiration White Space Gallery, Edinburgh, November 2017 SEASONS OF THE WITCH: MAIDEN, MOTHER, QUEEN AND CRONE Glasgow Theosophical Society, December 2017 Front Room Arts Salon, Marcelle House Studio October 2017 MY MOTHER IS AN ARTIST Founder and exhibitor June-July 2017 A group exhibition featuring visual art, written works and performances fr om artists who are mothers from across Scotland. VARIOUS EXHIBITIONS, 2015 Faracy exhibited in 2015 at Drury Street Glasgow, Edinburgh Palette, Stick Factory and Space Artworks. SPARK, 2013-2015 In this audio-visual piece, Faracy conducts an audience who are invited to perform improvised choral singing. The audience hold candles in a dark environment. Spark debuted at St Wulfran’s, a 1000-year old church on the south coast of England, and was most recently performed at Edinburgh’s Beltane Fire Festival. Watch a video of Spark THE OPEN GARDEN, 2009 Produced as part of the Brighton Festival Fringe, this exhibition used an outdoor space in Stanmer Park to display a range of artworks, from sonic objects to paintings. The viewer walks through a path in the woods wh ere they see these objects hanging from the trees. This exhibition was part of a residency at the Nourish Community Garden in Stanmer Park. Read more about the Open Garden AN UNPLUGGED MOMENT, 2009 In this analogue sound installation, Faracy created elemental instruments played by the earth, sun, air and water, creating a space away from the networked society. The installation formed part of Faracy’s MA Creative Media dissertation, in which she explored the place of ephemeral analogue artifacts in a digital world. OUTSIDE IN, 2009 Faracy’s paintings were featured in the 2009 Outside In exhibition at Pallant House, Chichester.

I am a self taught artist with an academic background in Anthropology and History along with extensive study world religions. I am fascinated particularly with the artwork and ritual that go along with indigenous religions.