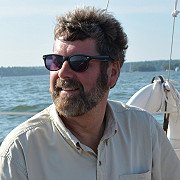 About the artist Brad Thomas

Each piece of my art has historical significance, so there is always a unique and fascinating story to tell about the painting. In today’s world of mass produced “sameness” there was a time when we created modes of transportation that were functional but also works of art. I take these unique and beautiful objects and place them where they were seen and shined in the past.

Born in Massachusetts, and a lifelong resident of Connecticut, Brad was born with a pencil and drawing pad in his hands. As a child, his earliest works showed the kind of detail that is now a hallmark of his paintings. One of the most memorable was his drawing of a thousand men marching (stick men) finished before he was ten. Brad graduated from Central Connecticut College with a fine arts and art history degree. After college he used his art training as an illustrator creating print advertising for commercial clients, and became the Marketing and Advertising Director for two national publications. At Soundings Publications, a national boating publication, he attended boat shows all over the world which exposed him to the historical world of marine and nautical art. He eventually partnered with a company in Leuven, Belgium and provided marketing, graphic and web site design for marine based companies throughout the world. After starting Waypoints Media, a company specializing in integrated marketing, graphic design, web sites and video, Brad continued to paint historical marine art. His work has been displayed at galleries, juried art shows throughout New England, Florida, and on major national fine art websites.