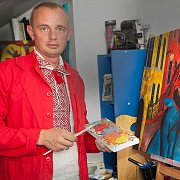 About the artist Boris Merzliakov

Biography A theory exists that the Creator (i.e. God), is constantly creating the universe lest it disappears. I’m very much supportive of this, since my photographing, I understand, is an attempt to create my own universe. As early as the high school, I began photographing and mastered the “ wet” process of photography; this magic reincarnation and developing images on a white paper still mesmerize me. During my study in Kiev Polytechnic (majoring in polygraphy), I had learned how to realize my own ideas using the computer technology. However, I still believe that photography has a soul, and you can’t enter it just pressing the knob. During 1998 – 2003, I had worked as a reporter, and dedicated my time to cover the political and economical events in my country. Then, somehow, I understood that I was bored to shoot the same people, if wearing different ties, and swiftly moved to fashion photography. This kind of work lured me with a possibility to created my own reality. Since 2003, I’m employed in the “Natali” journal. There, I began to kick off my own projects, inspired by Femininity as a leading foundation of Life. I’ve always been eager to know an intimate driver - whence? how? why? Just wanted to penetrate the most intimate sphere, to grasp the essence of femininity. Yet, to penetrate not with a violence but with an invitation. Thus I launched the TAZIK project (“tazik” means “basin” in Russian, basin and rubber boots, while boots symbolized women’s protection fr om the hostile outer factors. Or the Female Trouble project, where I did shooting all the year, with a single model in the various toilets. That is, I presume, is the only place wh ere a woman (almost always)))) remains alone, on a par with her thoughts, problems, including creative ideas… The breakthrough moment was the projects such as «Kiev. My Kiev», «Berlin always modern and sexy», «Venetian origin», «Lovely women» By combining the feminine and the architectural, I projected the naked body projection on the city image, with a subsequent addition of acryl color painting. Gradually, I started to experiment more in different styles of painting, increasingly refusing to use photography as a kickoff of the plot, and working exclusively with brush and paint.