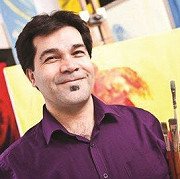 About the artist Aziz Anzabi

Dr. Aziz Anzabi, original from Iran and London based, focuses his art on sculpture and painting. Anzabi’s art has a main concept of myths and rituals. Exploring these aspects and aiming for an unconscious emotional state within the viewer, Anzabi's art takes form in both figurative and abstract styles. ”My ultimate goal is to have the viewer feeling a sense of familiarity with the work; a sense of having experienced this before.” He uses new continuity to potential collections of art to bring together a new concept originated from Iran. Aziz Anzabi's art describes a fantasy that shelters the individual in order to lead him throughout life. With strong surreal influences, Anzabi creates a universe proclaiming harmony. Anzabi's work has been displayed and purchased worldwide, from UK, USA, Spain, Italy and Dubai. In addition, his works have also appeared on National Stamps.He has written film scripts in the Middle East. Doctor Aziz Anzabi is also an academic, who also has written and produced books on the subjects of art and mathematics, being previously a professor at Tehran University.

I had more than 300 exhibition in different country