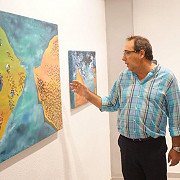 Antonio Jesús Pérez García was born in Antequera (Málaga), surrounded by fields of crops and landscapes that inspire his artworks generation after generation, as can be seen in "La casa de mi tía Carmela", painting that will be painted at least in four different styles. In 1965, when he was only one year old, his family moved to the city of Algeciras, where he has lived since then.

In his adolescence, he became interested in music and geography, but above all, in art, in fact he had already painted his first sketches when he studied the University Orientation Course. In 1995, he enrolled UNED to continue his university studies with Geography and History of Art degree. At that time, he discovered his true passion for painters such as Da Vinci, Van Gogh, El Bosco, Picasso and Dalí, teachers who influenced him so much to give lectures at the University, under titles such as: "The influence of women in Picasso" or "Decoding Da Vinci".