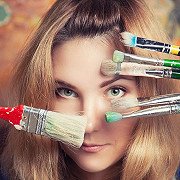 About the artist Anastasiia Grygorieva

She was born in Kiev in 1985 1996 - 2004 - she studied at the Republican Art school named after T.G. Shevchenko. She participated in various competitions and exhibitions in the school . 2000 - she won the international competition Â«The Small Monmarte of Bitola -2000Â». 2004 - enrolled in the Painting Faculty in the National Academy of Fine Arts and Architecture in Kiev. During study she was taught by teachers - JN Yatchenko, AV Yalansky, AP Sheremet, VG Vyrodova - Gauthier, AN Belianska. 2006 - she entered the workshop of monumental art of professor AV Kozhekova. While studying at the Academy she participated in competitions and exhibitions. 2008 - received Bachelor's Degree and continued her studies in Master of the Academy. 2010 - graduated from the Academy, defended her Master's thesis with excellent marks.

National Academy of Fine Arts and Architecture in Kiev. Ukraine