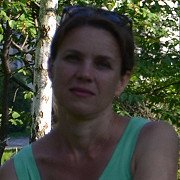 About the artist Alina Mezhibovskaya

Mezhibovskaya Alina Mikhailovna Born on March 9, 1971 in Kyiv. After graduating from the Republican Art School in 1989 and the National Academy of Arts and Architecture in 1998 I worked in an art team for reconstruction of the mosaic of the Mikhailovsky Monastery (Kiev). From 2003 to 2005 I worked as an artist-designer at the Directorate-General for Rendering Services to Diplomatic Missions. From 2006 to 2009 I taught at art studios. From 2009 till now - teacher of graphics, drawing and font at the Children's Academy of Art. Participant of national and city art exhibitions. 2001 Exhibition of works Artists of Kyiv, organized by Directorate-General for Rendering Services to Diplomatic Missions and foreign diplomatic missions. 2007 Exhibition of works by teachers and students. Kyiv Children's Club 2014 Competition for graphic works named after G. Yakutovich. National Association of Artists of Ukraine 2014 Artist's Day Exhibition. National Association of Artists of Ukraine 2015 Graphics Biennial. National Association of Artists of Ukraine