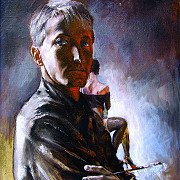 About the artist Alexandr Ivanov

Ivanov Alexander - artist. Born in 1962 He studied at the Kharkov Art School (studied under Ivashko AI). Then he graduated from the Kharkov Pedagogical Institute. G. Skovoroda, hudgraf (He studied under Shimov A. and Boyko NL) In 1992 he successfully completed it. In the early and mid-90s, he participated in several regional and republican exhibitions from the Union of Artists of Ukraine, several works participated in the international exhibition in Baltimore in 1992 In 1996, a personal exhibition was held at the Stanislavsky library in Kharkov. From 2002 to 2008 regularly exhibited in the Kiev gallery "Globus". Several works took part in the national exhibition of Ukrainian artists in Berlin in Germany in 2007. Included in the All-Ukrainian, as well as in the All-Russian electronic catalog of artists. In April-May 2010, a personal exhibition was held in the Kiev Art-Life Gallery. In February 2011, a personal exhibition was held in the Kharkiv Regional Gallery. He is a member of the Kharkiv Creative Union of Artists "SYMBOL". Pictures are in private collections