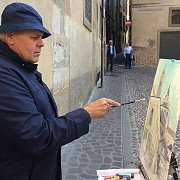 Representative of the artist is Svitlana Antyushyna
0 followers ·0 following
Follow
Overview
Overview
Follow
In the creative community of artists
at Jose Art Gallery since June 4th, 2018

About the artist Alexander Desiatnikov

Was born in Voronizhska Region, Leshchane village in South West Russia in 1959. Having grown up in a family of military that`s why has had finished a primary school in Slutsk, Belorussia. Oleksandr was graduated of the Bobruisck art college in South Belorussia. The next stage is moving to Sevastopol, Crimea, where artist carries out various activities of practice. He gets experience in decorating the interiors of public institutions. In 1987, the members of the Union of Artists of Ukraine granted to him a personal workshop where he successfully worked until 2014. In 2013 he was admitted to the Union of Artists of Ukraine in the city of Sevastopol. In the period from 2005 to 2015 he travels and works between Sevastopol and Kiev. He travels with his wife around the world and especially around Ukraine. While traveling the Artist get inspired by architecture, nature, picturesque views in different parts of Europe.