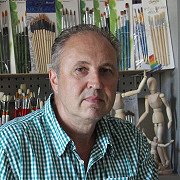 About the artist Aleksandr Lukyanov

"Believe in yourself, do not envy anyone, do not depend on anyone". The artist is completely free in his work, and no one has the right to demand fr om him that "he liked the green meadows more than brothels." A.Block. I like this expression of the poet. It gives the artist confidence in his thoughts. Born March 31, 1963 in a family of artists. My father worked at the factory as a graphic designer, and my mother also hainted. Both grandfather and grandmother painted, so i absorbed the smell of linseed oil and paint with my mother's milk. During the summer holidays in the village i could watch for a long time how my grandfather draws, then he ran to the river to catch minnows in a jar, and on the way back he looked into the grass and watched what the insects were doing there. He graduated from art school. He served in a group of Soviet troops in Germany, wh ere the opportunity appeared to prove himself as an artist. The first art exhibitions were in the Officer's Houses. After serving in the army he graduated from the University of Azov, worked as an engineer. In the difficult 90s in cooperatives. Then i learned about the work of Salvador Dali, i realized that something needs to be changed in his work. I tried to work in different styles. However, life dictates its own laws. To support his family, he organized his own furniture production, developed a design interiors, mastered the technique of airbrushing, but always thought that there was not enough time to do what he loved. Currrently i devote myself to growing paintings and daughters. Hobbies - fishing. Pictures are in private collections of the CIS and abroad.

Personal exhibitions were held in the city of Mariupol.