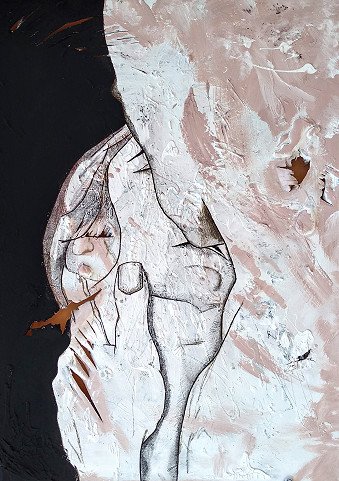 (Acrylic, putty, charcoal, ink, paper on canvas) The title of this work is a clear reference to the Freudian philosophy. The instincts of Creation and Destruction that govern the human being, reapper in this painting continuously and in different forms. The first to stand out is definitely given by the chromatic dualism between light/color and darkness/black (colorlessness), very marked dualism that completely divides the painting into an anteriore plane, and a posterior one within an almost absent, flat spatiality, due to the choice of a chiaroscuro barely outlined only in some points. The same painting was created by destroying another work previously done, and overlapping it. On the whole canvas we continuously find burns, cuts, and holes that have "destroyed" the surface. The moment I chose to portray, it is not casual, shows two lovers kissing, his face is not visible, but that of her yes, it seems as permeated by veiled melancholy and sadness: this kiss depicts a farewell, the moment preceding the detachment, and therefore again the Eros (the kiss represents the purest form of love), and again Thanatos (the goodbye of lovers is at the same time the destruction of their love). The result that derives from all this is a very simple and linear image, but at the same time it has an immense emotional impact. 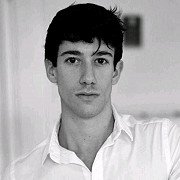