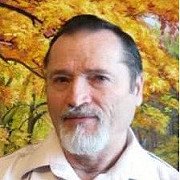 About the artist Leonid Fedorov

A bright representative of modern artists of peredvizhniki. Creates in the style of classic, realistic painting. He was born January, 2, 1948 year in the Kharkiv region. He graduated from The Kharkov Art School named after Illya Repin, The Kharkiv Art College, Kharkov Art and Industrial Institute (now Kharkiv State Academy of Design and Arts). 1971-1978 years - worked as the head of the Bureau of aesthetics of the Industrial Institute. 1978-1988 years - worked at the Kharkiv Art integrated works; 1989-1992 years - designed interiors and engaged in monumental works in an art cooperative; 1993-1995 years - was a teacher at the school; 1995-1998 years - designed Churches (painting and design) in Dnipropetrovsk region; 1999-2003 years - he was a head of the creative association of artists "Dnepropetrovsk Vernissage"; Since 2002 he has lived in the city of Zhovti Vody. Holds regular exhibitions of paintings (Kyiv, Dnipro, Vilnogorsk, Kryvyi Rih, Lubny, Zhovti Vody). In 2011 he started and headed the "Zhovtovodsk Vernissage". From 2018 till now he exhibits paintings at all-Ukrainian and international exhibitions.