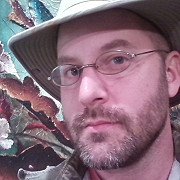 About the artist Chad Hoberer

Chad Hoberer is a Dallas based artist who has been painting for more than half of his life. With a BFA. in animation he is no stranger to figure & form and is often drawn to the chaotic beauty of nature. When Chad isn't at home painting in his studio, he is busy creating for the clients of his scenic business; C. Scenic. Chad has over twenty years of professional experience as an arist, painter and designer. He began his career as an animator, but soon moved on to follow his love of painting. Beginning his career in the Peter Wolf Shop in his late teens, Chad received the "old world" scenic training from some of Dallas's most talented artists and painters from all over the world. Chad has since worked as a Production Designer, Art Director, as well as a Scenic Painter and is recognized as one of the most well respected names in the industry. "I’m not trying to make a statement; I like the idea of spending my days painting." -Chad Hoberer