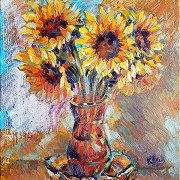 About the artist Alex Klas

Alex Klas  Academician of Arts & Master of Arts Alex Klas Laureate of the First Degree of the International Competition "World Culture and Art" (APOLLON - UNESCO) 2015 He is a laureate of a number of international prizes and awards. His art works are in the collections of the following: Moscow Museum of Judaism and Tolerance, Museum of Western and Eastern Art,  Odessa, Ukraine, Museum of Jewish History “Migdal-Shorashim”, Odessa, Ukraine, Museum of L.O. Utyosov,  Odessa, Ukraine,  Chanson Museum  in St. Petersburg, Russia, International LAC Academy, personality of literature, art, communication And Holocaust Museum Library of Northern California. His paintings are also in the Odessa collections of the House of Scientists,  the Union of Journalists,  the Philharmonic,  K.G. Paustovsky library; At the Art Bureau and Hit Parade in Frankfurt; In a many variety of public collections of San Francisco, California